Our team split up in the morning so that we could purchase supplies from different stores in parallel. Shine and I were in charge of electronics, so we made another trip to Yongsan Electronics Market to buy extension cords. We’re starting to become usual customers…

On the way to the market, Shine shared more of her Korean culture knowledge with me. Here are a few selected tidbits:

Hanja: Chinese characters in the Korean language. Before Sejong the Great created Hangul, most Korean documents were written in Hanja. When Shine was growing up, students learned how to read Chinese characters starting in the first grade. Learning Hanja is useful for understanding the etymology of Korean words that are based on Chinese words. Also, Hanja is sometimes used instead of Hangul when it is more convenient. For instance, sometimes 男 (“boy” in Hanja) is used in place of 소년 (“boy” in Hangul) because it is assumed that most Koreans can read the Chinese character. There is a many-to-one mapping of Chinese characters to Hangul (because Korean lacks a tonal system), so Hanja is often added to clarify meaning. There are also instances in which Hanja is always used. For example, when 故 (“dead” in Hanja) is used to precede the names of deceased individuals, Hanja is always used to show respect to them.

Couple rings. A girl was sitting across from us on the subway when a guy walked in front of her and started touching one of her hands. At first, I was confused because I didn’t realize the two people knew each other, but Shine explained everything to me afterward. In Korea, when a couple starts dating, the boyfriend will buy the girlfriend a ring. The girl and guy we saw had just broken up, so the guy was trying to take the ring off her finger. Eventually, the girl just took the ring off herself and gave it to him. He got off the train at the next station. Everything happened in silence because in Korea, making a scene in public is frowned upon.

Honor system for trains. The newer turnstiles in the subway stations don’t have a physical barrier. In other words, you technically don’t have to swipe your T money card in order to board the train, but the collective society expects that people will swipe their cards anyway. The honor system works pretty well in Korea.

Our next stop was emart. We were greeted by an employee who bowed to us as we entered the store. Apparently, that is his sole job: to greet every single customer. It must be tiring, but at least he had a standing mat.

Putting a coin into the shopping cart

In order to use a shopping cart, you need to insert 100 won into the panel on the handle. This is the brilliant part: when you return the shopping cart back in line and re-attach the chain, you get your deposit of 100 won back. It incentivizes people to return their shopping carts in an orderly fashion. What a concept. Whoever came up with this idea is a genius.

Also, emart has a bunch of sloped sliding platforms for the shopping carts. The best part is that the wheels automatically lock once they’re on the moving platform. Again, genius. 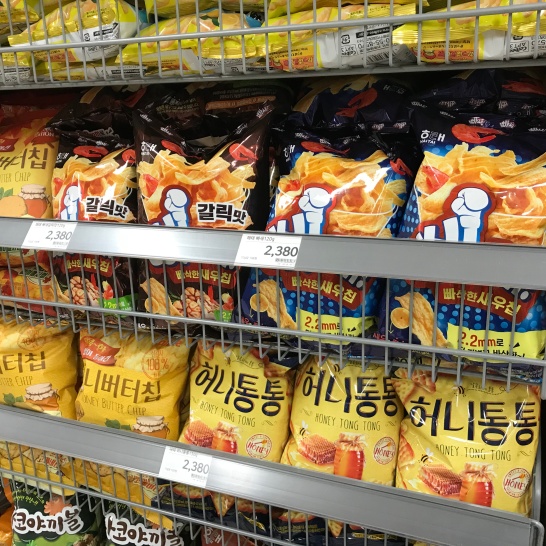 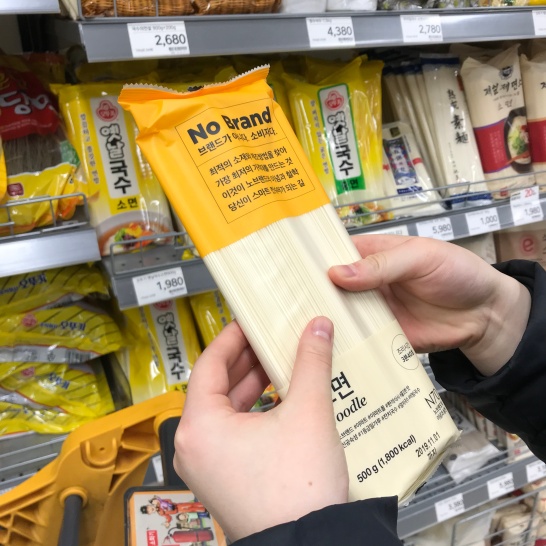 We managed to find a lot of items we needed, which was great. I also noticed they were selling batches of plastic fake bananas and was equally confused and amused. 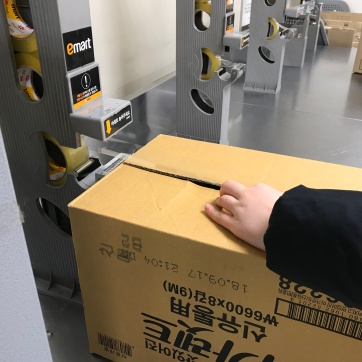 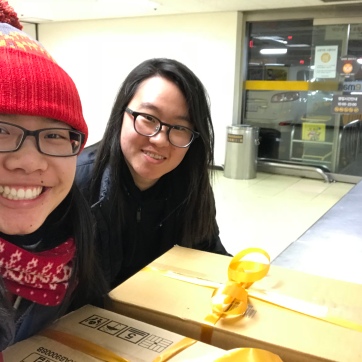 Afterward, I learned that emart has packing stations, where you can pick up free cardboard boxes and use them to carry your purchased goods. They even provide clear tape and packaging ribbon for you to use! Now, this is what I call effective recycling and reusing, not to mention the machines are pretty fun to use.

Shine and I lugged our morning’s purchases all the way to the school where we met up with Emily and Emu. We were pretty sweaty by the time we made it up the hill, but at least we were rewarded with a filling lunch at the school. I think I have a new favorite dish: dakgangjeong (닭강정). It’s a deep-fried crispy chicken dish with sweet potatoes, and it tasted delicious. 10 out of 10 would recommend.

Graduation was that day, so we got to see a bunch of students and teachers throughout the building. Some students who had participated in the workshop last January stopped by to say hi to Emily and Emu. It was great to hear that a lot of them were going on to attend university. Some are even planning on studying STEM subjects!

Our reunited team spent the afternoon setting up supply kits for the students. Everything is packed to perfection.

We celebrated by eating manju at the Myeongdong station. Yum!

In the evening, we had a wonderful mixer with another MIT GTL Korea team. We ate at a restaurant near Gangnam, and I ordered rice cake and dumpling soup (tteok-manduguk). It was cool to hear about the other team’s challenges with their schools, especially because MIT has never worked with their schools before.

Dinner with another GTL Korea team in Gangnam

Shine and I went back to the apartment pretty soon after dinner, but Emily or Emu might post about their adventures post-dinner 🙂 Stay tuned!