After a fun night at the local noraebang with another MIT team, Emily Damato and I decided that we wanted a more relaxing day. Here’s a couple of photos that we took then. I’ll spare you the videos of us singing.

Us with the other MIT team

We got back pretty late–around 1 am–and I woke up around 7 the next day to go to the War History Museum with Shine and Kelsey. We stopped by our favorite breakfast place, Paris Baguette, and then took the subway to the museum.

The War Museum serves as both a museum and a memorial for soldiers who lost their lives during the Korean War. The outside of the museum was really majestic, consisting of rows of columns between black slabs with the names of soldiers, Korean and foreign. I was surprised that this museum was free, and, even though technically it’s winter break here, we ran into several groups of school kids on field trips.

The outside of the museum

One of the black slabs with names on it

The courtyard of the museum 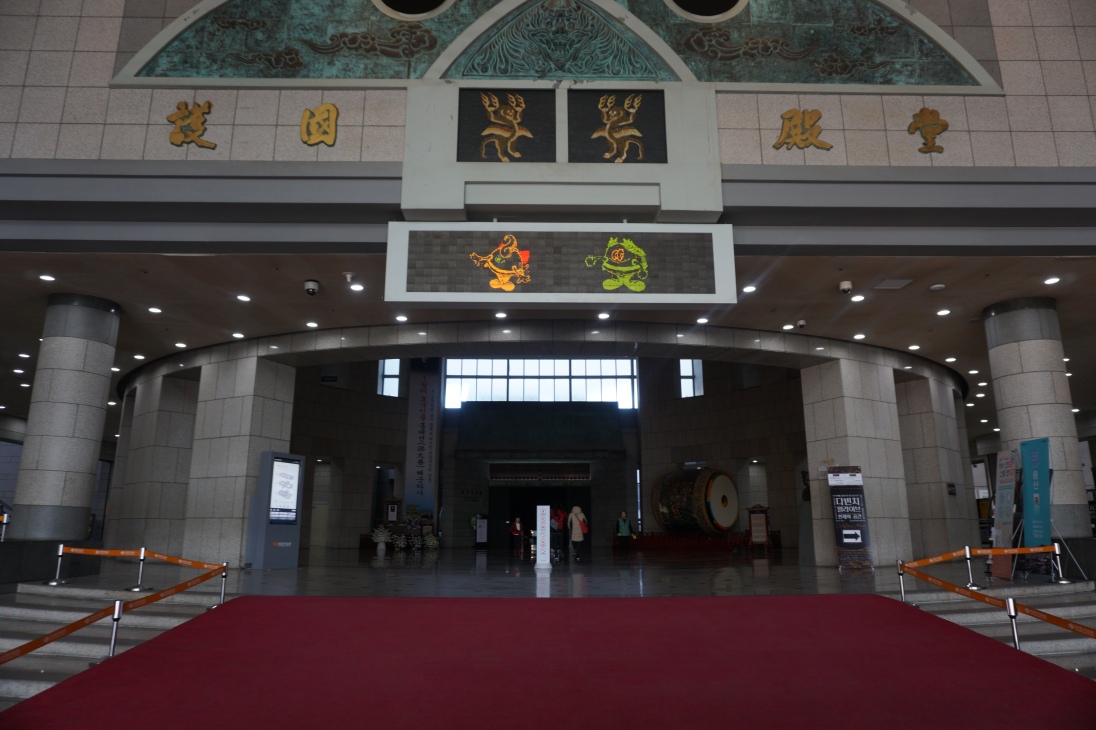 The majority of the museum was dedicated to the Korean War. Many of the exhibits contained stories of individuals who lived through the war, either as military personnel or civilians. Listening to those stories really made me feel grateful that I live in a period of time and in a place where my life is not affected by war. It’s hard to imagine the terror that those individuals must have gone through.

On a lighter note, there were many photo opportunities both inside and outside the museum. Inside the museum was a construction of an old Korean turtle boat. It was a covered boat used during the Joseon dynasty against the Japanese. According to Shine, it was to prevent the Japanese from boarding the ship since the Korean army was so outnumbered.

We also took photos at specific photo op places inside the museum. One of these photo op places was a reconstruction of Dokdo Island, a point of contention between Korea and Japan even today. Both countries claim the island as their own although it is currently under South Korean control. Shine told us that on all South Korean maps, Dokdo is specifically drawn in, even though it’s not to scale.

Outside the museum were replicas of different tanks, boats, and planes. We explored the inside of a naval ship and took some pictures in some tanks. 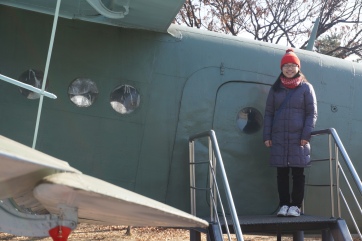 Kelsey and a plane

Me in a tank 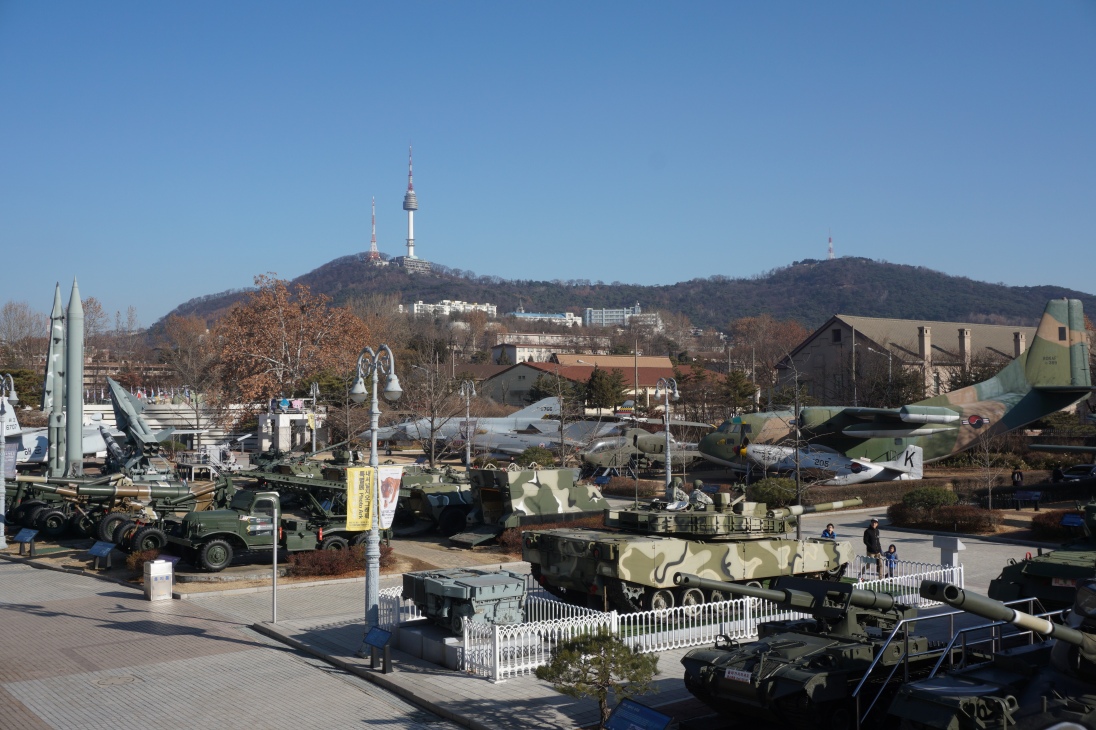 The view from the top of the ship

After the museum, we were quite hungry and so we went to a very traditional Korean diner for lunch. According to Shine, it’s customary in Korea to know what you want to eat before you even leave home. Restaurants tend to specialize in different types of dishes and tend to be clustered based on dish. We were on a street that specialized in stews and noodle dishes and so we had some really good stews for lunch. Shine ate a very traditional dish that contained a blood clot. 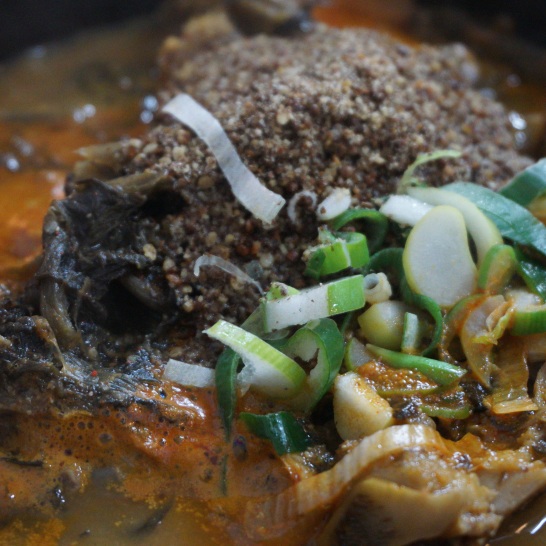 After lunch, we split up again. I went back to the apartment, Kelsey went to spend some time with her family before they flew back to the US, and Shine went to search for some more traditional Korean dishes (ask her about it). Emily had woken up by this point and we decided to go to a Korean spa, a jjimjilbang, for the afternoon.

Jjimjilbangs are gender-segregated spas that are common in Korea. We went to Dragon Hills Spa, which is a more tourist-y spa. It was seven stories tall and contained outdoor pools, restaurants, and an arcade area. These spas are actually a very popular place amongst young Korean couples. Since couples aren’t allowed to go to each other’s homes, the gender neutral sleeping areas consisted of hundreds of cuddling couples. Emily also tried a traditional charcoal egg and rice drink. 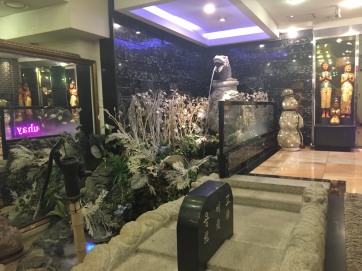 The different types of eggs

Emily with her eggs

The gender segregated areas of jjimjilbangs are nude. Last year, for me, that was definitely something that I felt very uncomfortable with initially. I think though, that after my experience, it actually made me more comfortable with my body. In that environment, since no one else is awkward or embarrassed or uncomfortable, you become less so as well.

Emily and I also both did body scrubs and hair masks, in which you get the outer layer of your skin scrubbed off by a lady at the spa. Afterwards, we felt like new humans. To top off the experience, we did some face masks that we picked up on the way. I would totally recommend checking out a jjimjilbang on any future visit and we are definitely planning on coming again. 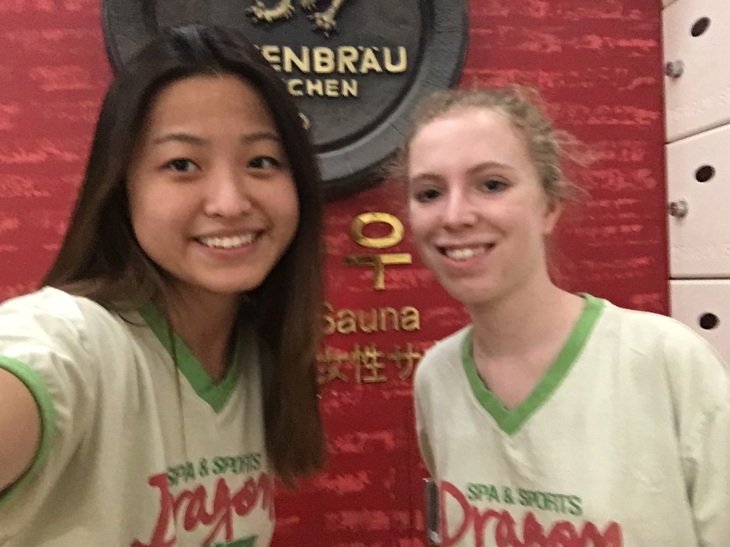 Us outside the sauna 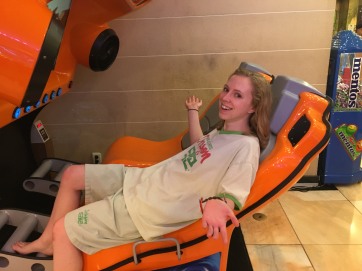 Emily at the arcade 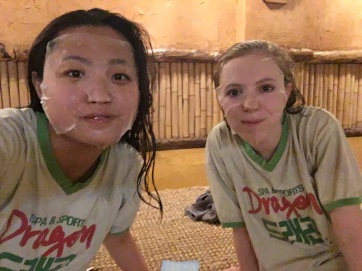 After the jjimjilbang, Emily and I headed to downtown Myeongdong to do some shopping. We learned that downtown Myeongdong is a super popular place in general on a Saturday. We ate some street food while browsing and I’m leaving some pictures for your enjoyment below.

Emily and her egg bun

Me with the Olympic mascots 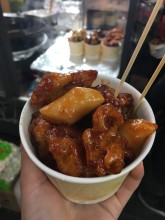 My dinner: Chicken and rice cakes 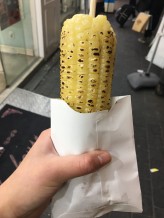 The crowning moment was probably when we purchased some bing-su, Korean shaved ice, before heading home. I’m salivating right now just thinking about it. Our bing-su had caramelized mangos, sweet cheese and vanilla shaved ice topped off with a scoop of frozen yogurt. Boston should get on this ASAP.

At around 10, we were pretty tired and so Emily and I headed back for an early evening. Sunday will probably be mostly prepping for teaching on Monday. I can’t wait!