Even the most controlling one realizes that the others can be employed as labor.

In the morning, Emu taught a module on circuits, which included an activity where students deconstructed a flashlight, made their own flashlights, played a game to learn how to read resistors, and built simple circuits using a breadboard. The flashlight activity was a big hit with all the students, though, for some reason, none of them actually wanted to keep their flashlights after they made them. 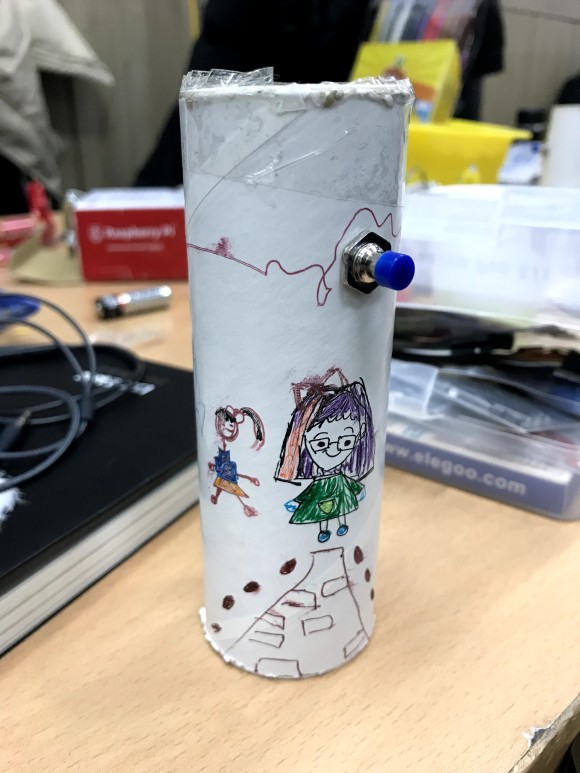 Flashlight that a student made 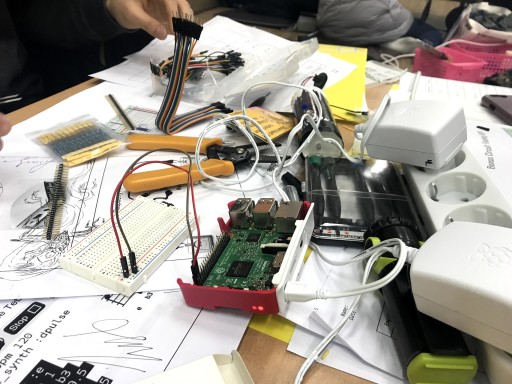 Some students were more interested in circuits than others, and some students also came in with much more experience building circuits than others. The group that I worked with got pretty frustrated with all the wires, but when we finally got the button to turn on the LED light, I could see how surprised (but happy) they were that it actually worked. Also, it was neat for them to see the Raspberry Pi being used as a power source.

In the afternoon, my original plan was to have the students make their own speakers and then use that for audio output for the ultrasonic theremin and music box Raspberry Pi projects. Unfortunately, that plan didn’t work out. Here’s why.

The speaker activity involves cutting up the audio jack portion of a set of earphones and connecting the phone plug wires to the two ends of a copper wire coil. 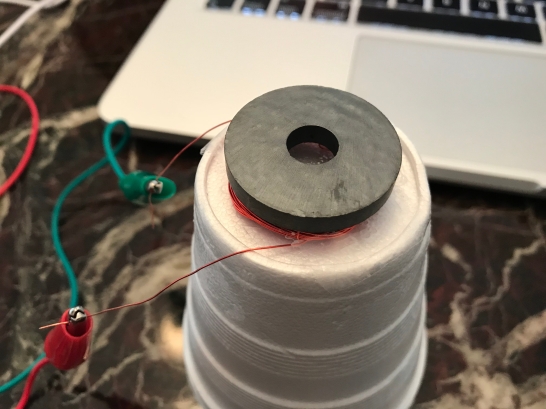 The speaker activity wasn’t as successful as we would have liked. Whether it was the result of buying super cheap earphones with flimsy phone plug wires (10 for $20, whoop whoop) or the result of having imperfectly shaped copper wire loops, we aren’t quite sure. On the bright side, one of our students seemed super intrigued by the debugging process and was determined to make his speaker work even though the supplies were not ideal. Not everyone got their speakers to work, but enough of them worked that the students hopefully didn’t think I was crazy.

Remember how I said that I had planned to use the speakers for the next two Raspberry Pi activities? Well, now we ran into the issue of the speakers not working, but the only earphones we had were cut up to make the speakers. You might be thinking to yourself, “Wow, Kelsey sure can’t plan ahead.” Those were my thoughts exactly.

Fortunately for us, we had access to the computer lab downstairs, so we ditched the Raspberry Pi projects and showed the students how to program using Scratch. We only had about 40 minutes of class left, so we were pretty lenient with what the students actually did. Some students started going through the Scratch tutorials in Korean, and the others played games that other Scratchers had made. We figured that as long as the students were doing something related to Scratch, we would allow it because, at the very least, the people playing games would realize that it was possible to make fun games using the Scratch platform.

On the way home, we stopped for dinner at a place that served pig’s feet.

We still had to do a lot of preparation for day 4, so the moment we got home, we opened up shop. We had to solder 8 Motor HATs for the robots, so we set up some sketchy soldering stations in our apartment.

Can you tell the difference?

If you look closely, there’s a terminal block stuck to the soldering gun.

It was fortunate that we had bought two extra Motor HATs because someone—I’m not naming any names—accidentally soldered the header onto the wrong side of a Motor HAT board, and another Motor HAT was missing the header part. Afterward, I stayed up until 1 AM again flashing SD cards and downloading all the libraries necessary to make the robot move. As it turns out, all the preparation was totally worth it.

Shine led the morning activities, which included a marshmallow tower challenge, a straw bridge challenge, an egg drop challenge, and finally a word search challenge. I think out of all the activities we’ve done so far, these were the ones with the highest participation rate. Usually, we would have a few students who were super tired and who would just put their heads down and sleep. Because these activities were all team-based, however, team members would pressure each other to work instead of sleep. As Emily so eloquently explained, “Even the most controlling one realizes that the others can be employed as labor.” Students would actually wake up their teammates and tell them what to do, which I found entertaining. Emu took some awesome photos, so hopefully, she’ll post some more in the near future. In the meantime, enjoy some photos I took on my phone.

In the afternoon, Shine and I had the students assemble robots. I gave them a handout with all the instructions, but some students still ran into difficulties. Emu and I ended up setting up a debugging station in the back of the room. We spent thirty minutes swapping out different parts for one problem robot before realizing that the students had just put the batteries in backward. We were so relieved when we finally got it working, but we were also slightly embarrassed that it took us so long to discover the problem.

We ate dak-galbi in Myeongdong for dinner. It was delicious but spicy. 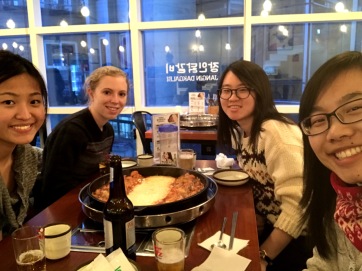 Fried rice with the leftovers 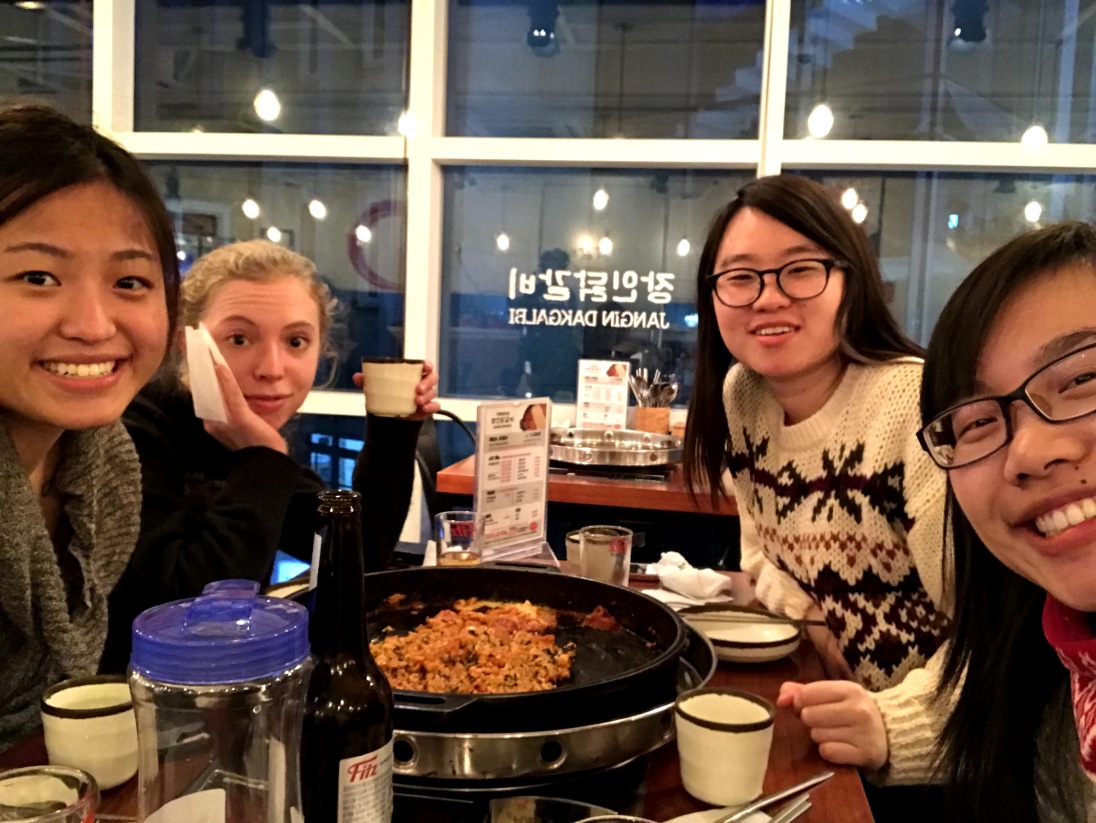 Everyone low-key dying from the spiciness (except for Shine)

To be honest, I fell asleep pretty soon after getting home, so that’s that for my day 4 update.